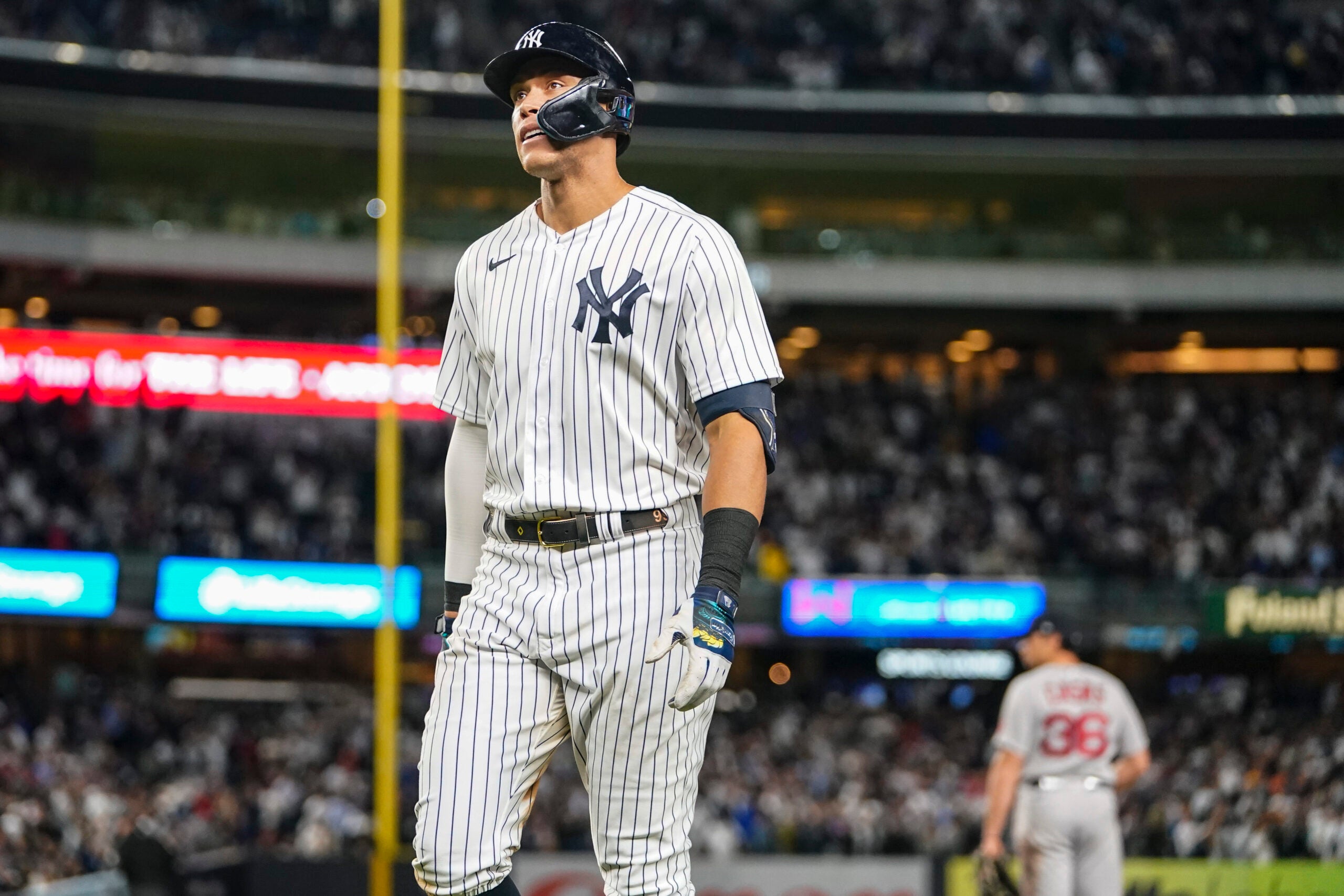 NEW YORK (AP) — Aaron Judge turned around a fastball in the ninth inning, and the already-standing crowd of 43,123 at Yankee Stadium erupted in noise, wondering, hoping he had hit a record-tying 61st home run and clinched a playoff berth with one mighty swing.

Seconds later, groans arose in unison. Kiké Hernández made the catch a step in front of the fence, 404 feet from the plate.

Judge remained one shy of the American League record set by New York slugger Roger Maris in 1961. But the Yankees did accomplish goal No. 1: Josh Donaldson’s 10th-innng RBI single gave them a 5-4 win over the Boston Red Sox and clinched their sixth straight playoff berth and 24th in 28 years.

“A great accomplishment. A lot of hard work over the course of the season to get to this point,” said Judge, who also threw out a runner at second base to help hold off Boston in the ninth. “But I think you could ask anybody in this room: The job’s not finished. We have an ultimate goal of going out there and winning our division, and setting ourselves up for the postseason. And this is step No. 1, step No. 1 of many steps to come.”

Coming within a few feet of his fourth walk-off home run this year, Judge went without a long ball for the second straight game since hitting No. 60 to match Babe Ruth’s 1927 season.

Judge has 13 games remaining. He walked three times and struck out once before his drive off Matt Barnes just to the right of straightaway center.

“I thought it would have been pretty showy to drop it at Monument Park out there,” Yankees manager Aaron Boone said.

Judge didn’t think it was gone, not on the first night of autumn with the game-time temperature a crisp 68 degrees.

“I just got underneath it a little bit,” he said. “A pretty windy night, so I was hoping maybe it was blowing out at the time I was hitting, but just missed it.”

The ball left the bat at 113 mph, the hardest-hit by anyone in the game.

“I go out there and get caught up in the history of what he could potentially be doing and I start tiptoeing around the at-bat, I’m probably going to hang something,” Barnes said.

Before each of the 26 pitches to Judge, Yankee Stadium’s usual cacophony was replaced by a silence more familiar at a church or golf course.

“There’s guys that are inside and stuff watching the game,” Taillon said, “and whenever he comes up, everyone runs outside to watch the at-bat because no one wants to miss it.”

Baseball Commissioner Rob Manfred was on hand. Judge’s fame has extended beyond the sport — he appears on the cover of the Oct. 3 issue of The New Yorker.

After an 0-for-2 night, Judge remained on track for an AL Triple Crown with a .316 batting average and 128 RBIs. Boston’s Xander Bogaerts is second in batting at .314 after going hitless in five at-bats.

With the score 4-all, Tommy Pham led off the ninth with a one-hopper off the right-field wall against Clay Holmes (7-4). Judge played the carom and from the warning track threw a 92.3 mph strike to shortstop Isiah Kiner-Falefa for the tag. It was Judge’s sixth assist of the season.

Then in the 10th, with pinch-runner Marwin Gonzalez at second as the automatic runner, Kaleb Ort (0-2) intentionally walked Gleyber Torres before Donaldson grounded a single just past diving third baseman Rafael Devers and into left.

Triston Casas hit a solo homer and pinch-hitter Reese McGuire delivered a three-run drive for Boston in a four-run seventh off Clarke Schmidt. Harrison Bader had a tying sacrifice fly in the eighth after Stanton’s leadoff infield single and a stolen base by Tim Locastro — he was called out initially but a video review reversed the decision.

Donaldson gave a speech to teammates after the Yankees secured their record 58th postseason appearance with their major league-high 16th walk-off win of the season, one shy of the team standard set in 1947.

“Welcome back to the playoffs,” he told them.

New York has a 7 1/2-game lead in the AL East over second-place Toronto, on track for a first-round bye. Boone became the first manager to reach the postseason in each of his first five seasons, according to the Elias Sports Bureau.

“We’re in the dance and we got a chance now,” he said.

Aroldis Chapman had another shaky outing for the Yankees in relief, walking two batters with one out in the eighth — the second on four pitchers.

Yankees: LHP Zack Britton (Tommy John surgery) was activated from the 60-day IL and LHP Wandy Peralta (back) was put on the 15-day IL, retroactive to Monday.

Get breaking news and analysis delivered to your inbox during baseball season.