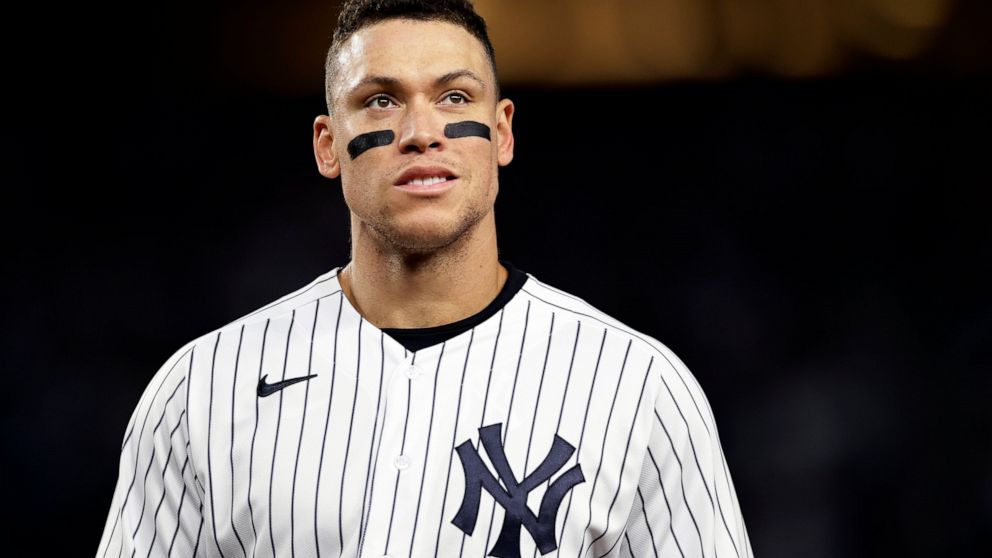 NEW YORK — Aaron Judge didn’t come close to hitting his 62nd home run, going 1 for 2 with a pair of walks as the Baltimore Orioles beat the New York Yankees 2-1 on Friday night.

One game after tying the American League home run record that Yankees star Roger Maris set in 1961, Judge struck out in the first inning, singled in the third and walked in the sixth against Jordan Lyles, then was intentionally walked in the eighth by rookie Félix Bautista.

Judge has six games left: two this weekend against the Orioles and then four at Texas that end the regular season.

Yankees reliever Zack Britton appeared to get hurt as he threw a tiebreaking wild pitch in the sixth inning, and the Orioles (81-76) managed to stay alive in their long shot bid to gain an AL wild-card berth. The Yankees said Britton, who returned last week from Tommy John surgery, had left arm fatigue.

A sellout crowd of 47,583 filled Yankee Stadium on an autumn night with a chill in the air. The crowd buzzed each time Judge walked to the plate and fans appeared to make an effort not to come to a complete quiet with every pitch to the slugger, as they did during last week’s homestand.

Judge is bidding for the first Triple Crown since Detroit’s Miguel Cabrera in 2012. He leads the AL with 130 RBIs and narrowly trails Minnesota’s Luis Arraez in the batting race, .3147 to .3141.

Baltimore assured it will stop a streak of four consecutive losing seasons and must win its remaining five games and get some help from Seattle and Tampa Bay in order to reach the playoffs. After going 52-110, the Orioles could become the first team since at least 1900 with a winning record one year after losing 110 or more.

Ryan Mountcastle singled in a run in the first for his 84th RBI. Oswaldo Cabrera tied the score in the fifth for the AL East champion Yankees with his fifth home run since his debut on Aug. 17.

Jordan Lyles (12-11) matched his career high for wins in 2019, allowing four hits in seven-plus innings. He tied his season high with nine strikeouts and walked one.

Domingo Germán (2-4) walked his first two batters in the sixth and retired Mountcastle on a groundout, Britton relieved and walked Gunnar Henderson and then threw a pitch to pinch-hitter Jesús Aguilar that went to the backstop, and he failed to cover the plate. Britton was replaced by Ron Marinaccio. Under baseball’s rules, a pitcher must face three batters or complete a half-inning, but he can be replaced earlier if hurt.

Rookie DL Hall pitched a perfect ninth with two strikeouts for his first save since 2019 at Class A.

DJ LeMahieu played seven innings at third base and went 0 for 3 in his first game for the Yankees since a stint on the IL caused by an inflamed right second tie. He was in a 2-for-38 slide through Sept. 4 before going on the IL.

Gold Glove CF Harrison Bader sprinted to make a diving backhand catch against Mullins on the left-center warning track in front of the 399-foot sign for the final out of the fifth inning.

Yankees: INF-OF Matt Carpenter, sidelined since breaking his left toot on Aug. 8, took batting practice and could be activated for next week’s series at Texas, though the Yankees are leaning toward having him report to a camp at Somerset, New Jersey, where he could get more at-bats ahead of the Division Series … LHP Wandy Peralta, sidelined since Sept. 18 with back tightness, threw a bullpen and will throw another Sunday before the Yankees decide whether to activate him. … RHP Frankie Montas, out since Sept. 16 with right shoulder inflammation, likely will start throwing Saturday … OF Andrew Benintendi (broken wrist) is scheduled to take swings Saturday but not against pitchers. … RHP Michael King said Mets medical director Dr. David Altchek determined his UCL was intact. King broke his right elbow while pitching against Baltimore on July 22 and anticipates being cleared for a normal offseason. … RHP Clay Holmes had injection in pitching shoulder and is unlikely to pitch again during the regular season, Boone said after game.