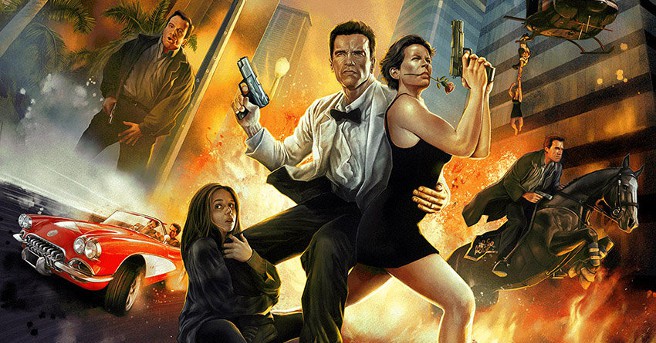 For years, Awesome Art We’ve Found Around The Net has been about two things only – awesome art and the artists that create it. With that in mind, we thought why not take the first week of the month to showcase these awesome artists even more? Welcome to “Awesome Artist We’ve Found Around The Net.” In this column, we are focusing on one artist and the awesome art that they create, whether they be amateur, up and coming, or well established. The goal is to uncover these artists so even more people become familiar with them. We ask these artists a few questions to see their origins, influences, and more. If you are an awesome artist or know someone that should be featured, feel free to contact me at any time at [email protected].This month we are very pleased to bring you the awesome art of…

Dave is a full-time professional illustrator and works from his home studio in Manchester, UK.

After education, Dave developed his skills as a professional by working as a self-employed greeting card illustrator, a product designer and character artist at a toy company and a graphic designer as part of a creative agency before making the leap to full-time illustrator in 2017.

Sports illustration is where it all began, starting with a small football exhibition in London – Dave’s work has been featured in exhibitions all over the globe. Which helped his uniquely stylized artwork build a worldwide audience and boasting clients including Nike, Adidas, UEFA, and ESPN.

Dave is also an official Star Trek artist and was honored to be part of the 50/50 exhibition which celebrated the 50-year anniversary of Star Trek. CBS selected 50 illustrators from around the world to produce a poster for based on the show’s history.

His style injects his own understanding of the subject within his work, creating heavily character-driven compositions which compel the eye to look closer at the extra detail. He believes every good poster trigger an emotional response and evokes the feeling of wanting the viewer to watch the movie again.

Dave only started creating poster artwork for collectors in 2018, but has been a follower of the alternative movie poster scene from the start. Since 2019, his posters have all sold out, which already shows the level of demand for his work.

JoBlo: What got you started as an artist?
DAVE: After straddling the positions of graphic designer by day and an illustrator in evenings and weekends for almost 8 years, I decided to go all-in on my career as an illustrator in 2017 and have never looked back.

I’ve been drawing as early as I can remember. I used to draw wherever I could, spaceships on the underside of our dining table, doodles all over my grandparent’s sofa, and superheroes on my bedroom walls – I did eventually move onto more suitably acceptable drawing surfaces.

As a youngster, I used to copy artwork from comics (in particular 2000ad, Secret Wars, Roy Of The Rovers), video game covers, book covers (especially the Fighting Fantasy books by Steve Jackson and Ian Livingstone), and movie posters, which coincidently is everything my illustration work revolves around now.

Upon reflection, this helped me understand the basic constructs behind what made great art and helped me discover what I really warmed towards aesthetically.

Since then, I’ve worked many roles in my career, some creative, others not so much, but all seem to manifest themselves in my practices today as an illustrator.

Who were some of your favorite artists growing up?
I’ve been infatuated with the works of many different artists over the years from surrealist artwork of Salvador Dali, MC Escher, and Hieronymous Bosch to comic artists like John Romita Snr, Simon Bisley, and Alex Ross to video game artists like Oliver Frey and Bob Wakelin and not forgetting the mandatory mentions of movie poster artists such as the ‘legendary’ Drew Struzan, Bob Peak and John Alvin.

I could go on listing names and works but these guys have had the biggest influence on my work.

What should we be looking out for from you in the future?
Currently, illustrating a cover for a fictional series of books.

Three posters are being currently at the printers – Shaun Of The Dead, Ferris Bueller’s Day Off, and The Running Man.

I’ve also been talking to Greymatter Art and hopefully looking to produce some work with them before the year is out.

In addition to this, my sports illustration is still going strong and I currently have a very long list of private commissions to work through – next up is Wayne’s World and Starship Troopers.

Being a fansite, we have to ask you… What are some of your favorite movies/TV shows of all time?
I’m glad you said ‘some’ because there’s no way you can just pick one, although, even ‘some’ is a tough ask – I tend to base the term ‘favorite’ on how rewatchable they are.

From Dusk Till Dawn

In Search of Darkness Part III