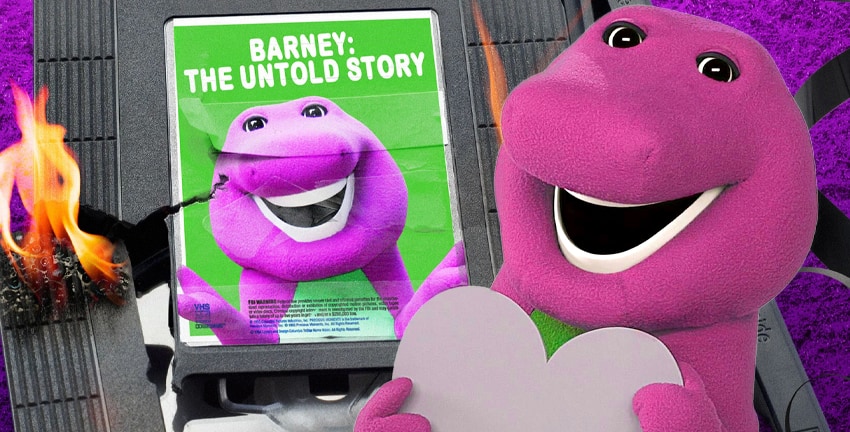 Barney was everywhere when I was growing up. But despite than the purple dinosaur’s simple message of love and understanding, the thing I remember the most was how much everyone over the age of ten seemed to hate Barney. It went beyond that at times, some people just seemed to straight-up loathe the character. Peacock has released a trailer for I Love You, You Hate Me, a two-part documentary that chronicles the rise and fall of the furious backlash towards Barney and what it says about the human need to hate.

Barney & Friends was created by Sheryl Leach and premiered on PBS in 1992 and came to an end in 2010, and while I was aware of the backlash against the show, the documentary trailer proves I didn’t know the half of it. Bob West, who initially voiced the character, reveals in the trailer that he actually received death threats against him and his entire family. “‘I Love You, You Hate Me’ unpacks how a children’s character who stood for inclusion, understanding, and kindness birthed a movement of anger and criticism that threatened the show, its creators, and their futures,” executive producer Joel Chiodi, head of documentaries and SVP of strategic development at Scout Productions, said. “As it spotlights the beginnings of modern-day hate culture, this documentary traces the creation of the character and how it took a toll on the people closest to it, examining the surprising and lingering impact the ‘Big Purple Dinosaur’ left on American society.“

Daniel Kaluuya: Get Out actor explains why he’s producing a Barney movie

It seems that Barney is having something of a comeback; in addition to the documentary, there’s also a movie in the works from none other than Daniel Kaluuya (Get Out). “Barney taught us, ‘I love you, you love me. Won’t you say you love me too?’ That’s one of the first songs I remember, and what happens when that isn’t true?” Kaluuya said. “I thought that was really heartbreaking. I have no idea why but it feels like that makes sense. It feels like there’s something unexpected that can be poignant but optimistic. Especially at this time now, I think that’s really, really needed.“

The official synopsis for I Love You, You Hate Me:

I Love You, You Hate Me is a limited series chronicling the rise and fall of Barney the Dinosaur’s furious backlash — and what it says about the human need to hate. From Barney-bashing to frat parties to homicidal video games, something in American society broke into a million pieces, and it’s never been put together again… or is this just who we were all along?

I Love You, You Hate Me will debut on Peacock on October 12th.