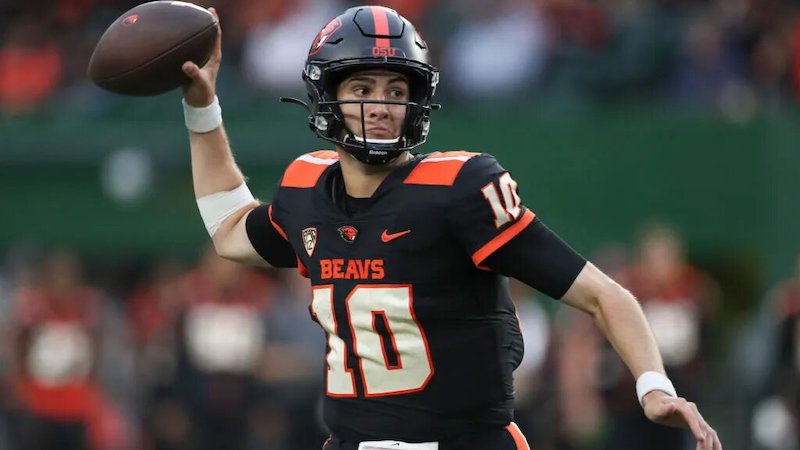 Week Four in the SuperWest features the opening of conference play for the Pac-12 and the final weekend of nonconference games in the Mountain West.

The lone marquee matchup of the day, at least according to the television executives, is No. 15 Oregon at Washington State.

But the most anticipated game is arguably No. 7 USC at Oregon State.

There are other intriguing matchups, too, including San Diego State against Toledo and Arizona at California.

I preview all nine games here, and the picks of our Senior Writers and Broadcasters appear at the bottom.

Hank Bachmeier and the Broncos head to El Paso to take on a UTEP team that’s struggled to score.

The Miners are averaging just 14.0 points per game and have only posted five touchdowns this season. UTEP quarterback Gavin Hardison has more interceptions than TD passes and has been sacked 11 times through four games.

Facing such an inferior opponent, Andy Avalos could challenge his defense to hold them to a shutout.

Boise State has forced just four turnovers this season, creating an additional point of emphasis for Avalos to utilize in El Paso.

But until Bachmeier brings the BSU offense up to its potential, the calls for Taylen Green will only continue.

If the Miners keep the score respectable by forcing turnovers, Green might get an opportunity to prove he should be the starter.

In what might be an ultimatum game for Karl Dorrell, the Buffs host UCLA for a midday kickoff.

Colorado athletic director Rick George sent out an odd statement after the blowout loss to Minnesota, potentially signaling Dorrell is on his final straw.

But the Bruins enter Folsom Field with something to prove. The performance against South Alabama was unfocused and embarrassing, likely resulting in an angry roster needing to get the bad taste out of their mouths.

The CU defense hasn’t stopped anyone through three games and probably struggles against Chip Kelly’s scheme. And with an inept offense, it seems unlikely that the Buffs will have much offensive success against Bill McGovern’s defense.

With a combination of circumstances stacked against it, Colorado could find itself on the losing end of another blowout.

Losing its quarterback of the future to the transfer portal this week, San Diego State hosts a MAC opponent with a capable offense.

The Rockets operate a fairly balanced scheme that shares the ball among four different running backs.

Led under center by Dequan Finn, the dual-threat quarterback might be the deadliest runner the Aztecs have faced so far this season.

Limiting Finn on the ground should keep the Toledo offense in check. But if he keeps the ball on the ground effectively, the Rockets might walk away with the victory.

On the other side of the ball, the Toledo defense is one of the weakest SDSU has seen to start the year.

The Rockets have the No. 103-rated rushing defense in the country, potentially signaling a strong day from Braxton Burmeister and the Aztec offense.

Look for SDSU to move the ball effectively on the ground, with the deciding-factor coming down to the Aztec defense’s ability to contain Finn.

No. 15 Oregon at Washington State

In another showdown on national television, No. 15 Oregon heads to Pullman to take on the Coug Raid.

The Duck offense is humming after the opening week disaster to Georgia, yet Kenny Dillingham faces a defensive genius in Jake Dickert.

The Wazzu coach has an uncanny way of baiting opposing coordinators out of their strengths, making this matchup a battle of schemes and play-calling.

Assuming the matchup between the UO offense and WSU defense is a relative wash, the game could come down to the play of Cam Ward.

The Coug Raid’s timing was off against the Wisconsin defense, but Ward put it together against talentless Colorado State.

The Oregon defense, on the other hand, is quicker and arguably stronger than what Wisconsin puts on the field.

Look for the Ducks to utilize blitzing and pre-snap movement to frustrate Ward all game, generating mistakes from the opening drive.

And with Bo Nix operating Dillingham’s system at full throttle, Oregon could be tough to beat.

Winless against Arizona since 2009, California faces a much-improved Wildcat roster. Led by Jayden de Laura and Jacob Cowing, the UA offense has been hitting on all cylinders.

But the key to slowing it down is getting pressure on de Laura. The former Pac-12 Offensive Freshman of the Year struggled against Mississippi State’s rush, providing the playbook for Cal to utilize.

The X-Factor, though, is de Laura’s willingness to run. He was hesitant to do so against the Bulldogs, yet posted a career-high 50 yards rushing against North Dakota State last week.

On the other side of the coin, California can’t commit turnovers. The Wildcat defense has forced six through three games and the Bears don’t have the offensive firepower to overcome many mistakes.

If Cal wins the turnover battle and doesn’t allow de Laura time to make decisions, it should find a way to win.

No. 7 USC at Oregon State

In arguably the Game of the Day in the Pac-12, No. 7 USC faces its toughest challenge of the season to date.

Oregon State has a strong offensive line that’s generated an effective offense. The Beavers intentionally keep their passing attempts to around 25 per game, moving the ball on the ground behind their powerful front line.

Quarterback Chance Nolan has been carving up defenses off of play-action, creating a potent offense that’s winning games.

But the battle to watch is OSU’s secondary and linebackers against Lincoln Riley’s system. The Beavs have snagged six interceptions this season with what might be the top secondary in the Conference.

Yet, Oregon State is one of the worst teams at securing sacks. The Beavers have just three on the season, potentially indicating Caleb Williams will have plenty of time to make decisions.

And with Riley’s offense putting up 50.7 points per game with zero turnovers on the year, it’s arguably a long shot for OSU to secure the upset.

Needing to bounce back after the loss to Oregon, the Cougars host a Wyoming team full of confidence.

Nobody gave the Cowboys a shot to beat Air Force last week, but the Mountain West foe has rattled off three-straight wins since losing the opener to Illinois.

Yet, Jaren Hall and the BYU offense is rearing to get back on track. Puka Nacua and Gunner Romney remained sidelined, while tight end Dallin Holker decided to transfer this week.

Still, the Wyoming run defense is nowhere near the caliber that the Cougars have faced the last two weeks.

With an expected ability to move the ball effectively on the ground, Hall should lead the offense on plenty of scoring drives. And after giving up 41 to the Ducks, the BYU defense should come out looking to send a message.

Look for the Cougars to contain quarterback Andrew Peasley and stall out the Cowboy offense.

Stanford at No. 18 Washington

The Tree gave up 35 points to USC in the first half, but had a bye week to prepare for Washington’s scheme.

Michael Penix Jr. hasn’t put a foot wrong all season, operating DeBoer’s system with head-turning efficiency. Without much to worry about on the Cardinal defense, the Dawgs could realistically put up 50 points or more.

Complicating Stanford’s chances, leading running back E.J. Smith is reportedly unavailable for the game. That leaves backup Casey Filkins to carry the load, a task that he is taking on for the first time in his career.

And with a UW defense playing better than expected, it’s fair to wonder if this matchup turns into a blowout.

The lone concerning factor for Washington is the matchup of its secondary against Stanford’s passing game. Tanner McKee is a capable quarterback that has an elite set of receivers and tight ends to utilize.

If McKee has enough time to allow plays to develop, the Cardinal pass-catchers could make enough grabs to keep the game interesting.

No. 13 Utah at Arizona State

If there’s one wildcard matchup of the weekend, this is it.

Whenever teams fire their coach the very next game is always fascinating.

Rosters usually go one of two ways: play motivated with a shocking win, or play with little effort in an ugly blowout. It’s unclear which way the ASU roster will trend on Saturday night.

Regardless, the Sun Devils face one of the toughest defenses in the Pac-12 after struggling against Eastern Michigan.

Emory Jones hadn’t been effective in Herm Edwards’ offense, but reports out of Tempe indicate changes are coming under interim coach Shaun Aguano. To beat Utah, Jones will need to be in top form.

Cam Rising and the Ute offense have been putting up points, with Rising and Tavion Thomas combining for 12 touchdowns on the season.

Matched up with Arizona State’s weakest defense in several years, the nightcap in the desert could get ugly.

Game Picks from our Senior Writers and Broadcasters

Covers Basketball and Football as a Senior Writer and Assistant Editor for SuperWest Sports.