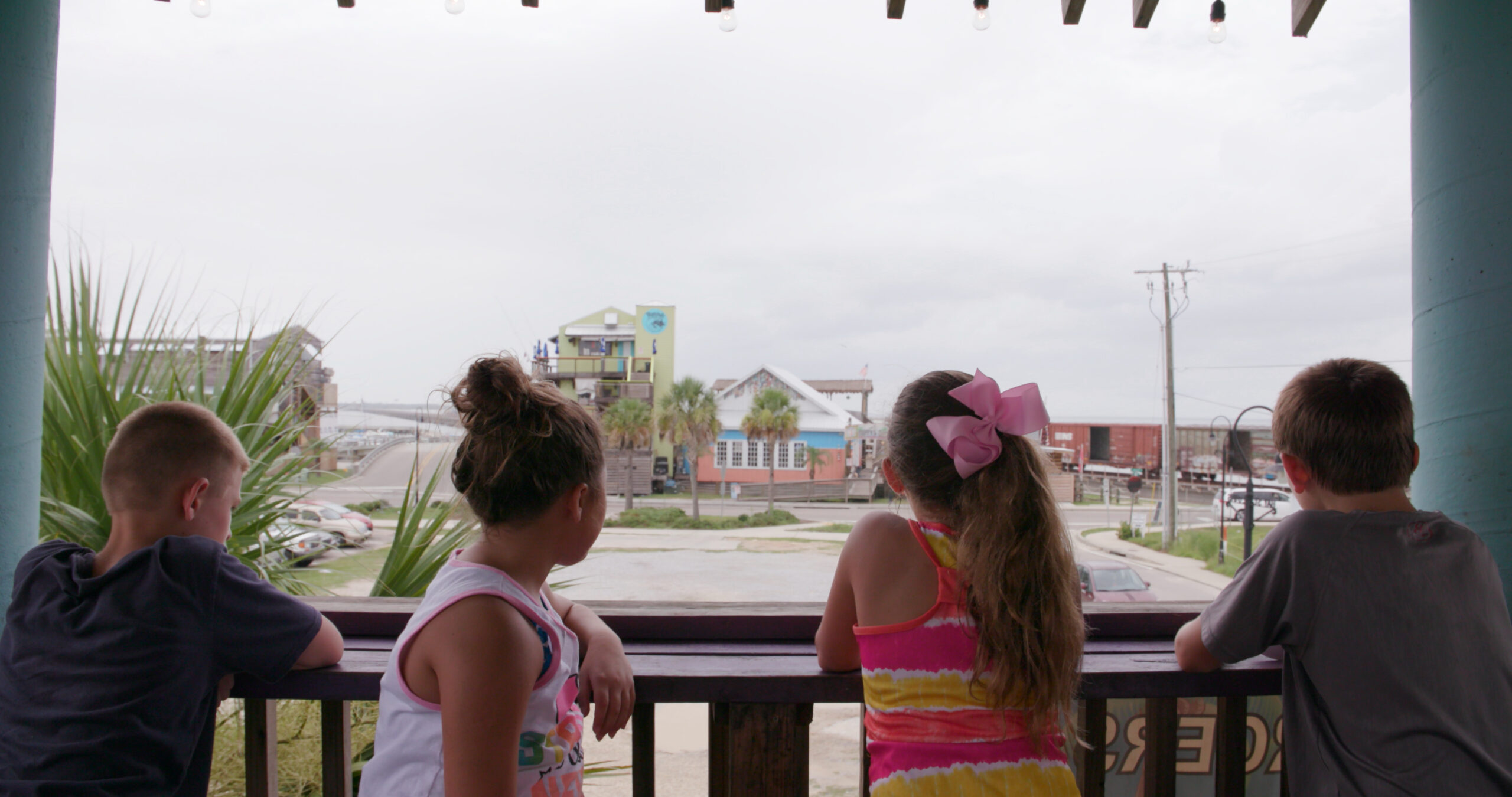 “In the Bones” is premiering at Nashville Film Festival October 2.

W&H: Describe the film for us in your own words.

KDdlV: A searing look at the culture that overturned Roe v. Wade, “In the Bones” is a cinematic journey through Mississippi that provides a poetic — and sometimes painful — portrait of American culture through the ordinary lives of women and children.

W&H: What drew you to this story?

KDdlV: The 2016 election was a defining moment in our country — one where our slow march towards equality came to a screeching halt, and then began to rapidly move backwards. I took part in the Women’s March in DC and was very affected by it. In the past, I’d made films focusing on issues ranging from the criminal justice system to the environment, but I hadn’t yet focused my cinematic lens towards women’s issues, and I was inspired to try.

Mississippi is the state where women struggle the most in poverty, the gender pay gap, and shortened life expectancy, so it felt like an organic place to explore the impact of the U.S. patriarchy. But honestly, it was the women and children — each in their own way fighting against patriarchal structures — that truly drew me in.

Getting to know our participant Cassandra Welchlin and watching her diligently lift up women, and particularly Black women, moved me. I was also drawn to better understand Lynn Fitch who, on the one hand, led Mississippi Women for Trump, and on the other hand, fought for equal pay for the women of the state. That disrupted a stereotype for me and seemed worthy of a deeper look. Those nuances gave producer Jessica Anthony and me the drive to embark on this story.

W&H: What do you want people to think about after they watch the film?

KDdlV: Our film elicits a lot of emotion through both intimate family moments and events political in nature unfolding in the State Capitol. My hope for the viewer is that they can interrogate their preconceptions, and think about how connected we all are in the U.S.

It’s natural to identify with one region of the country vs. the country as a whole, but we all have a direct impact on each other. The predominately white, male Mississippi legislative body is responsible for all women in our country losing the rights to control our bodies. While what unfolds in the film is specific to Mississippi one one level, it is also a mirror in which to ponder our culture at large.

W&H: What was the biggest challenge in making the film?

KDdlV: Our team, from the get go, set out to push ourselves creatively. We set out to make something that we thought could function as an intimate artistic journey as much as a political one. We ask the audience to intellectually and emotionally engage with the story both in terms of what to get out of the film, as well as how to watch the film.

“In the Bones” is the most unconventional film I’ve made in terms of structure and narrative approach, and I’m really proud of that. It meant forcing myself to challenge the conventions I’m used to working in. I was in constant conversation with the footage, working hard to shape a deep experience for the viewer — one where the truth could be felt, not told. But that meant the whole film was a challenge, one I could have never done without our producer Jessica Anthony, co-director Zandashé Brown, consulting producer Selina Lewis, and editor Lila Place.

And of course, well, there was that thing called COVID, which shut down our production period probably three months sooner than we would have otherwise.

W&H: How did you get your film funded? Share some insights into how you got the film made.

KDdlV: We were very lucky to have amazing executive producers who were involved early, and that helped us get the film off the ground. And after that, we worked hard to patchwork together public and private grants. We were supported by JustFilms | Ford Foundation, Catapult Film Fund, Sundance Institute Documentary Film Program, International Documentary Association (IDA), Good Gravy Films, and the Keep The Lights on Foundation, to name a few.

W&H: What inspired you to become a filmmaker?

KDdlV: I grew up in a politically turbulent time in Berkeley, California. Issues of gender, race, class, and the environment were fiercely debated throughout my community, at dinner tables, and on schoolyards. Having opinions on politics, literature, film, and arts carried a great deal of social currency in everyday life.

Weirdly, I grew up without a television so I didn’t consume a ton of media. Art and storytelling with a higher purpose was considered the gold standard in my childhood home. By high school, my obsession with visual storytelling began, first through photography. The camera gave me permission to talk to people I didn’t know. The experience of that ended up meaning something to me in terms of how to be a human on this earth and connect with people from all walks of life.

Years later, I saw the documentary film “Brother’s Keeper.” The character-driven narrative, eliciting empathy while unpacking a societal issue, blew me away and changed my life. I left the theater knowing exactly what I wanted to do. Several years after graduating college and working as a bartender, a photographer and a photo editor, I began my path to making films and have never turned back.

KDdlV: Early in my career, I went to Sundance totally green, just to listen and watch and maybe try to meet an established documentary filmmaker. On a panel a filmmaker said, “Do not become a documentary filmmaker unless you feel you absolutely cannot help yourself. Because it might be the worst decision you ever make.” To me this was the best and worst advice all tied into one! It struck me as very discouraging at the time, but in hindsight I understand what he meant. It is not a career for the materialistic or the faint of heart.

W&H: What advice do you have for other women directors?

KDdlV: Look for female mentors who can help you navigate the system. There is finally a decent number of strong powerful women directing, producing, and editing documentary films — who understand the importance of lifting each other up. And each time you make it to the next level, whatever that might be, make sure you move forward in your work with an intersectional feminist lens, and support others coming up behind you.

W&H: Name your favorite woman-directed film and why.

KDdlV: There are so many! In terms of recent treasures by female directors, both “The Mole Agent” by Maite Alberdi and “American Factory” by Julia Reichert (and Steven Bognar) come to mind as films I love. But probably the film that got in my head the most was Kirsten Johnson’s film “Dick Johnson is Dead.” From the opening frame until the closing, I cried. And mixed in with my tears was enormous laughter. Laughing in the most robust, earnest way. To find an emotional tenor where your audience is crying and laughing with equal depth, I don’t know, I’m not sure I’ve ever experienced that before or since. When John Prine died I read the excerpt below and thought of Johnson: “Some artists are searingly witty; their cleverness electrifies; they hit just the right word and elicit a gasp or a laugh or both. Some artists are achingly sincere; they see and feel more than the rest of us and follow their revelations with utter faithfulness. Prine was both at the same time — among the rarest of artistic aptitudes. […] Prine held these competing values in equipoise throughout his long career, and the perfect balance was so powerful that of course the world discovered him quickly.”

W&H: What, if any, responsibilities do you think storytellers have to confront the tumult in the world, from the pandemic to the loss of abortion rights and systemic violence?

KDdlV: In my work, I almost always end up, in one way or another, exploring systems that keep the current power structure in place. That said, I don’t think storytellers have a responsibility to tell any one type of story. I value films that seek to share something totally separate from the headlines.

Sometimes, I learn the most about myself by watching esoteric films that explore the deeply personal vs. the political. I think it is important that artists are free from constraints, but I do think if storytellers take on those issues, they also take on a great deal of responsibility. Any time you are influencing the national dialogue on an issue, there should be a journalistic rigor to your work.

W&H: The film industry has a long history of underrepresenting people of color onscreen and behind the scenes and reinforcing — and creating — negative stereotypes. What actions do you think need to be taken to make Hollywood and/or the doc world more inclusive?

KDdlV: We should be pushing for a more diverse and equitable industry at all levels — among decision-makers and creative teams, but also across genres. I’m much more interested in a future where voices of color are taking on topics that have been traditionally told through the white lens — which is, let’s face it, most topics. Some examples are Cheryl Dunye directing episodes of “The Umbrella Academy” or Jennifer Phang directing “Riverdale” and “Flight Attendant.” More of that, please.