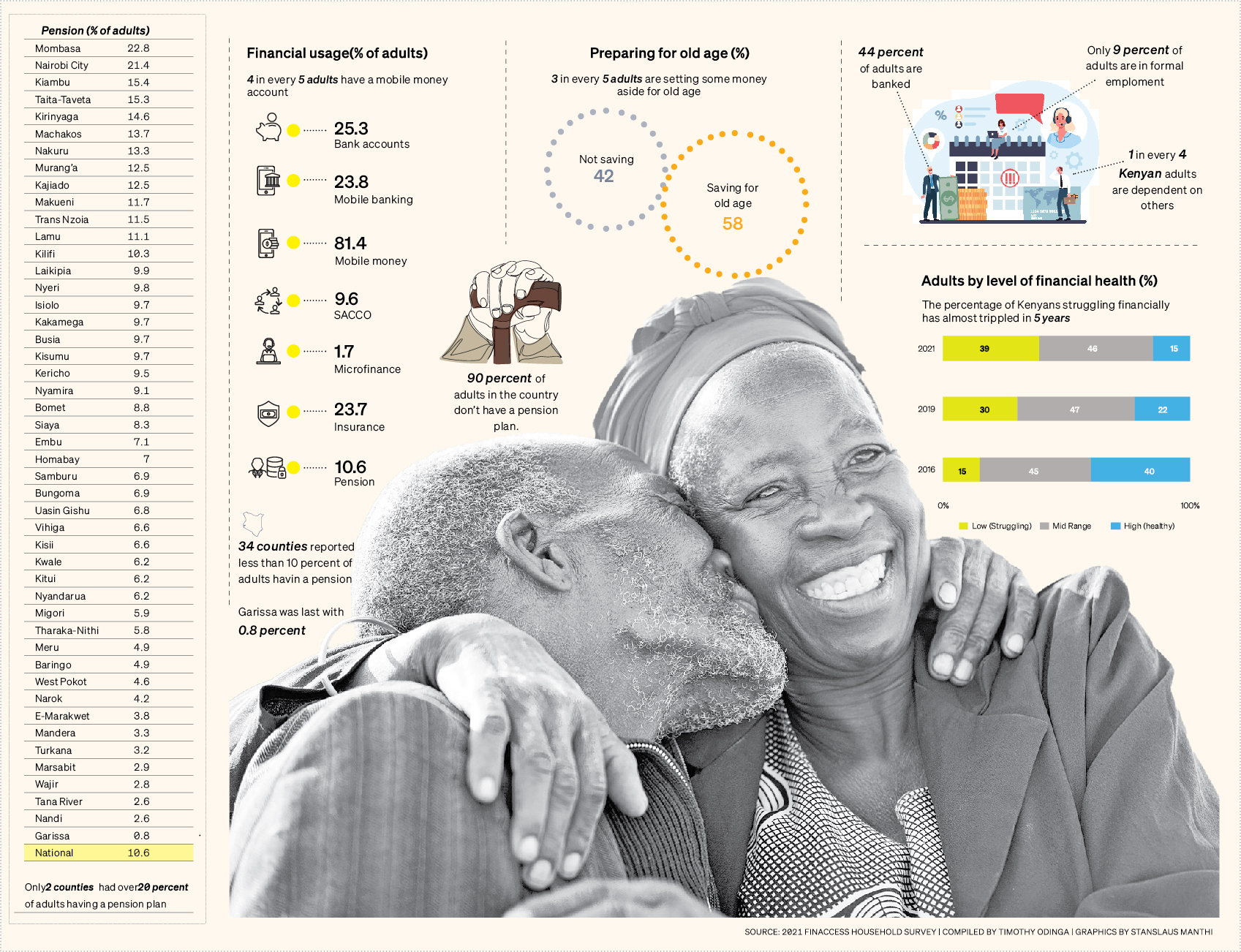 About 89.4 percent of Kenyan adults lack a pension scheme, setting the stage for a rise in old-age poverty and forced work.

A survey part-conducted by the Central Bank of Kenya (CBK) indicates that only 10.6 percent of Kenyans belong to a pension scheme amid the push from the State to grow retirement savings.

This points to a possible deepening of old-age poverty, which in itself has significant social implications in a country where the traditional patterns of the young caring for the old are changing.

Analysts point out that the relative low number of Kenyans saving for pension and the value of payouts at retirement have compelled many retirees or those approaching the legal retirement age of 60 to continue working.

The findings of the household survey by the CBK, FSD Kenya and the Kenya National Bureau of Statistics (KNBS) show that only Mombasa (22.8 percent) and Nairobi (21.4 percent) counties had a pension uptake rate of over 20 percent.

Kenyans on average are living longer and the rank of the elderly poor is rising as the traditional social fabric yields to the forces of rapid urbanisation and changing social and filial trends.

Kenya’s official life expectancy is 67 years whereas the expected retirement age is 60 years. The low pension uptake therefore increases pressure on the working class, which in turn reduces investments and savings.

In the past, social security was not a bother to many Kenyans because there was a large extended family to fall back on in the rural areas.

But as the social fabric weakens and more people opt to retire in urban centres, the trend is increasingly becoming a headache to policymakers.

This is what prompted the State to start sending a monthly stipend of Sh2,000 to those above 70 to cushion them from old-age poverty.

The survey, however, shows that 58 percent of Kenyans are saving some cash for old age through other platforms, possibly missing out on the compounded returns offered by pension schemes.

Garissa was bottom of the list of counties, with a pension uptake of 0.8 percent followed by Nandi and Tana River at 2.6 percent each.

Official data show that over 80 percent of persons above the age of 60 were in active employment, with the majority forced to work for basic needs.

The upside is a large number of matriarchs and patriarchs are unconsciously keeping diseases at bay largely blamed on sedentary lifestyles that come with idleness during retirement.