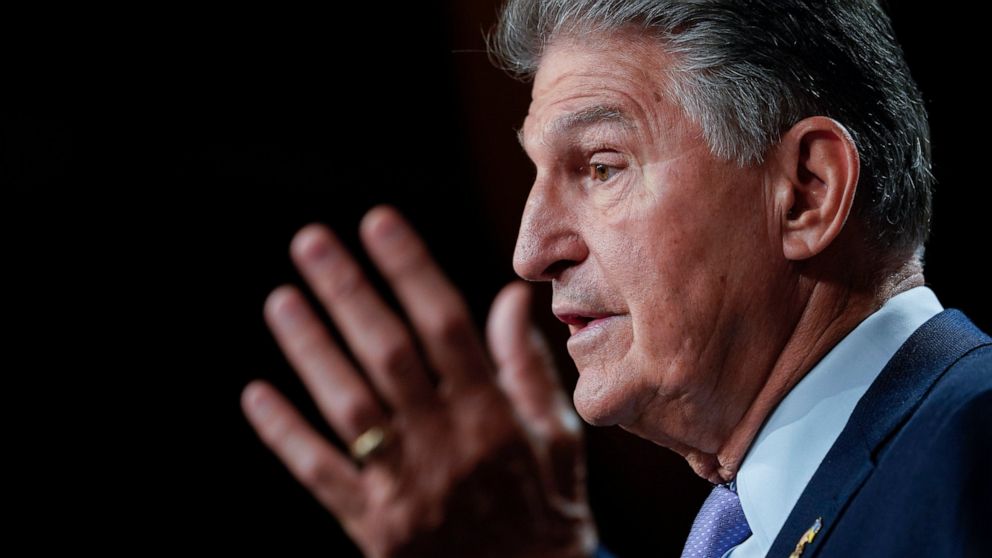 WASHINGTON — Sen. Joe Manchin on Tuesday railed against what he called “revenge politics,” as liberals in the House and Senate team up with Republicans to oppose his plan to speed permits for natural gas pipelines and other energy projects.

Manchin, a West Virginia Democrat who chairs the Senate Energy Committee, secured a commitment from President Joe Biden and Democratic leaders to include the permitting package in a stopgap government-funding bill in return for his support of a landmark law to curb climate change.

But in the weeks since Biden signed so-called Inflation Reduction Act last month, Democrats and environmental groups have lined up to oppose the permitting plan, calling it bad for the country and the climate. Climate hawks such as Vermont Sen. Bernie Sanders and Massachusetts Sen. Ed Markey, along with dozens of House members, say the permitting plan should be excluded from the must-pass spending bill.

Many Republicans agree. Wyoming Sen. John Barrasso, the top Republican on the Senate energy panel, called the permitting deal a “political payoff” to Manchin, whose vote on the climate bill was crucial to the law’s passage.

Manchin’s actions on the climate — including secret negotiations with Senate Majority Leader Chuck Schumer, D-N.Y. — “engendered a lot of bad blood” among Republicans, Sen. John Cornyn, R-Texas, told reporters. “There’s not a lot of sympathy on our side to provide Sen. Manchin a reward.”

At a news conference Tuesday, Manchin expressed bewilderment at such sentiment, saying he’s “never seen” such an example of “revenge politics,” with Sanders and the “extreme liberal left siding up with Republican leadership” to oppose his plan.

“It’s revenge towards one person — me,” Manchin said.

“I’m hearing that the Republican leadership is upset,” he added. “They’re not going to give a victory to Joe Manchin. Well, Joe Manchin is not looking for a victory.”

“Defeating the Big Oil side deal is not about revenge,″ he said. “It’s about whether we will stand with 650 environmental and civil rights organizations who understand that the future of the planet is with renewable energy and energy efficiency not approving the Mountain Valley Pipeline,″ a nearly-completed natural gas pipeline from northern West Virginia to southern Virginia. Manchin’s plan would expedite the pipeline and steer legal challenges to a different federal court.

While legislative text of his permitting plan has not been made public, Manchin called the bill “a good piece of legislation that is extremely balanced” and does not “bypass any environmental review.″ Instead it would accelerate a timeframe that can take up to 10 years for a major project to win approval.

Sen. Shelley Moore Capito, R-W.Va., has released a similar plan that would speed environmental permitting, but Manchin said his plan should have broader appeal, since it would streamline environmental reviews for renewable energy projects as well as fossil fuels. Manchin’s plan has support from Biden and other Democratic leaders.

But a letter signed by more than 70 House Democrats slams the proposal as a “dirty side deal being negotiated behind closed doors, outside of proper government process and the view of our families and communities who it will deeply impact.”

If passed, “this deal will only make it easier for the fossil-fuel industry to site polluting projects in our communities and perpetuate the industry’s practice of concentrating destructive pollution projects in communities of color and poor communities,” said the letter, led by House Natural Resources Chairman Raul Grijalva of Arizona.

The fissure among Democrats could complicate the party’s efforts to keep the focus on this summer’s major legislative victories — including the climate bill and a separate law to boost the semiconductor industry and create more high-tech jobs in the United States — heading into the midterm elections to determine which party controls the House and Senate.

More immediately, the divide is testing the ability of Schumer and House Speaker Nancy Pelosi to keep enough Democrats in line to avoid a partial government shutdown at the end of the month.

Schumer has said he will attach Manchin’s proposal to the stopgap funding bill, a promise Manchin said Tuesday he expects Schumer to keep.

The permitting plan “is going to be in the” funding bill to avert a government shutdown Sept. 30, Manchin said. If opponents are willing to close down the government “because of a personal attack on me, this is what makes people sick about politics,” he added. “It makes me sick about it.”

House Majority Leader Steny Hoyer, D-Md., did not directly answer when asked whether Manchin’s permitting proposal would make it harder to pass the government funding bill, known as a continuing resolution.