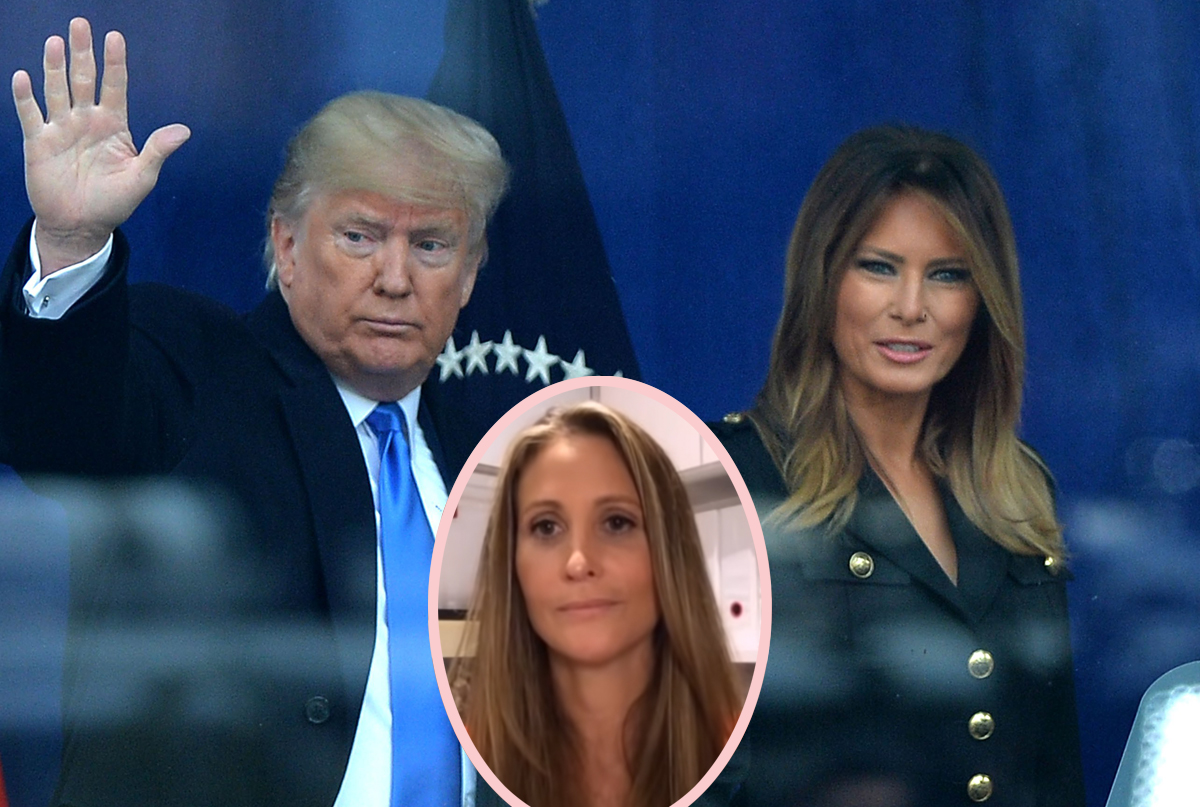 A devastating natural disaster hit the USA this week, killing several and doing billions of dollars in damage. So many Floridians lost their homes…

But not to worry! The former First Lady is here to… encourage you to buy her new Christmas ornament NFTs??

Yes, announced this week, Melania Trump‘s holiday grift… sorry, gift… is a Christmas ornament NFT. It’s like an actual Christmas ornament except instead of sitting in a box in the attic for ten months out of the year and being taken out for display during the holidays, it’s… kind of like if you open that box and there’s just a receipt for a hypothetical ornament. There’s nothing to display, but you can… say you supported a “charity” effort from a family so crooked they aren’t legally allowed to run charities anymore. So that’s nice!

OK, we joke, but along with the NFT you do get an actual brass ornament — and for only $45 it’s a steal! Yes, that’s the wording we’re going with… And like she said in her tweet earlier this week, the Econotimes reports the former FLOTUS is promising to give “part of the proceeds” to children’s educational charities. Maybe she’ll send them the blockchain record of the profit and keep the practically worthless physical money.

For real though, these are the only tweets Melania sent out this week, amid the landfall of the destructive Hurricane Ian in her home state:

CryptoWatch: China is World’s Blockchain Leader and NFTs on the Rise with Apple, Melania Trump https://t.co/dNr2YxafUI

And only after those did she retweet:

Our thoughts are with those affected by Hurricane Ian. Thank you to the first responders. Please stay safe.

BTW, that account is USAmemorabilia, “the premiere NFT platform featuring United States memorabilia.” They’re the company putting out the Christmas ornament NFTs. She couldn’t even write her own message of hope to Florida.

Amazing… This family is truly one of a kind.

“how desperate, now selling cheesy Christmas ornaments that look like something out of a dollar store”

“Why is there no record of your “charity”? How much of the profit goes for scholarships… a penny per ornament? If you really cared and weren’t out just to make money it would be a non profit”

“Tell us how much the charity receives per ornament. And if the charity is the same Trump superpac that’s paying for your designer clothes.”

One of the many former employees of the Trumps to turn around and trash them once they were out of the business is Stephanie Winston Wolkoff. Only in addition to being Melania’s senior adviser she was also her BFF. But she’s spent the last couple years blasting her ex-boss, spilling all the inside dirt on the selfishness, corruption, and greed.

So if you think random tweeters were going to do a better job of slamming this move — and its cynical timing — better than she was, you have another thing coming! Stephanie went off to DailyMail.com, excoriating:

“Just when I thought the Trumps couldn’t go any lower. As we witness the catastrophic devastation in Florida, our former first lady Melania Trump is focusing on selling tchotchkes and rehashing something she herself said about Christmas but claiming otherwise. Did she not listen to herself trash Christmas? It’s appalling that Melania is grifting off of Florida’s tragedy in order to remake her image.”

Oh yeah! We almost forgot about that one! Wolkoff is the former friend who leaked that audio in which Melania trashed the idea of Christmas decorations she was expected to work on as First Lady, saying:

“Who gives a f**k about Christmas stuff and the decoration? But I have to do it.”

Someone call Kirk Cameron to save Christmas from this lady! LOLz!

It is pretty hilarious that she’s the one now trying to take advantage of people’s love for the holidays to sell overpriced knickknacks. Her former friend wasn’t done taking her to school, slamming:

“Hundreds of people are faced with loss of life and Melania Trump wants to sell you digital Christmas ornaments for a roofless house that lacks electricity. This is Melania…she is out of touch with reality and out of touch with the needs of people. For Melania, it is all about money and attention. Nothing, absolutely nothing has changed about her.”

Seems pretty clear Wolkoff regrets helping her for so long. She added:

Yeah, sad is the right word. Certainly better than “merry” in any case.

Melania did NOT forget what she said about Christmas btw. She’s just got some “alternative facts” to present about that whole mess. In a statement to Breitbart News last week, she actually addressed the scandal, saying:

“I will personally set the record straight because the mainstream media has failed to provide context for these misleading exchanges. Christmas is an important time for me, my family, and the American people, and my devotion to the holiday is personal and profoundly serious.”

She also said her former friend “spitefully edited and released our conversation to create the perception that Christmas is not significant to me.” Inneresting that she never claimed the audio was edited until now… when she had Christmas baubles to sell.

On the denial, Stephanie hit back:

“Melania is absolutely deluded if she thinks she can justify what she said about Christmas. Tell me, how does one edit that statement? You can’t make this stuff up. Nothing in those audio recordings were diced or sliced. Nothing was edited. They speak for themselves.”

“This is what you call a poorly executed publicity stunt in hopes of gaining some sort of traction for her trinkets. All of a sudden Melania is a Christmas enthusiast? Does she not realize how embarrassing this is, not to mention how incredibly desperate she must be to drag me into her marketing scheme?”

“Why would Melania rehash what she absolutely DID say about Christmas? Doesn’t she have more pressing issues right now, like her husband and his kids being sued by New York’s attorney general for fraud?”

We’re thinking legal fees, but that’s just a guess. What do YOU think of Melania selling Christmas ornament NFTs for “charity”?