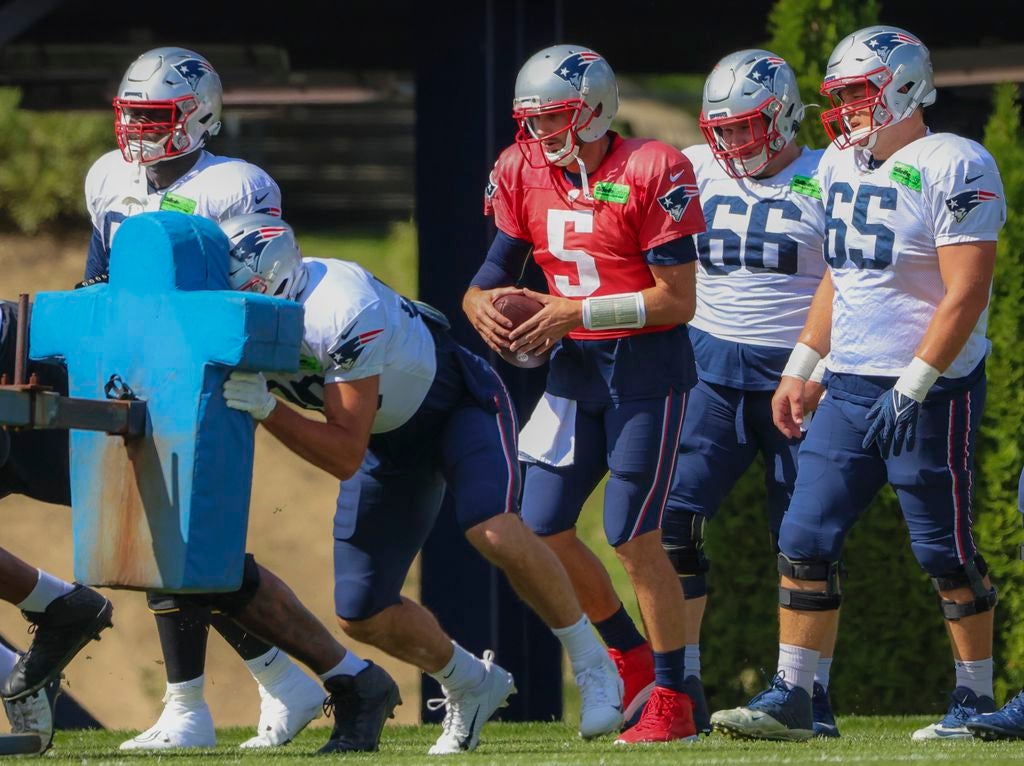 Welcome to Season 11, Episode 4 of the Unconventional Preview, a serious yet lighthearted, nostalgia-tinted look at the Patriots’ weekly matchup.

To answer Bill Belichick’s question, no, he does not look like an orthopedic surgeon. But he sure can put on a clinic in obfuscation.

During his news conference Wednesday, Belichick said 12 times that Mac Jones was day to day with an ankle injury suffered late in last Sunday’s loss to the Ravens. I swear there was a twinkle in his eye every time he said it, too, like he knew this was his long-awaited follow-up hit to “We’re on to Cincinnati.”

The injury looked serious — Jones hopped off in obvious agony — and reports that it was a severe high ankle sprain suggested the second-year quarterback would be absent from the huddle for the 1-2 Patriots for at least a couple of weeks.

But Belichick gave up nothing, and while Jones missed practice Wednesday and Thursday, a strong indication he will not play, there were still reports floating around suggesting he was doing everything in his power to be ready for Aaron Rodgers and the 2-1 Packers Sunday.

I’ll believe it when I see it, or more specifically, when he lofts his first 50-50 ball in the general direction of DeVante Parker. All evidence and common sense suggests backup Brian Hoyer, who turns 37 Oct. 13 and has lost his last 11 starts in the NFL, will be the Patriots quarterback Sunday.

Hoyer will know what to do, but his arm has a habit of reluctance when it comes to following orders. He’s 16-23 as an NFL starter. Rodgers is 141-67-1. The Patriots are averaging just 16.7 points per game, and the Packers allow just 15 points per game. Oh, and the Packers just defeated the Buccaneers and that rather accomplished guy Hoyer used to back up, Tom Brady.

This won’t be a mismatch. Belichick won’t allow it to be. But it sure looks like one on paper.

Kick it off, Bailey, and let’s get this thing started …

THREE PLAYERS TO WATCH OTHER THAN THE QUARTERBACKS

Romeo Doubs: Think Davante Adams is having second thoughts about refusing to sign a long-term extension with the Packers, resulting in his trade to the Raiders in March? Probably not, I suppose. While he’s struggled to reach his typically extraordinary level of production so far in Josh McDaniels’s Las Vegas offense — he has 17 catches for 189 yards and 3 touchdowns — he is now the highest-paid receiver in NFL history, so that’s a decent consolation while he adjusts. Meanwhile, back in scenic Wisconsin, Rodgers, the quarterback he left behind, is seeking a receiver to at least attempt to fill Adams’s spot in his Circle of Trust. (Do we even want to know what kind of weird stuff goes on at that initiation? I don’t think we do, though it probably involves devouring a mound of clay before running the full route tree.) Doubs, a rookie fourth-round pick out of Nevada, has seized his opportunity and is coming off the best game of his young career, an eight-catch, 83-yard effort in the Packers’ 14-12 win over the Bucs last Sunday in which he caught a 21-yard touchdown pass to cap Green Bay’s first drive.

Jonnu Smith: If you’re thinking of him as a sunk cost at this point, hey, I can’t blame you. After four years with the Titans in which he flashed enticing athleticism but never collected more than 448 receiving yards in a season, the tight end signed a four-year, $50 million contract ($31.25 million guaranteed) with the Patriots during Belichick’s “Supermarket Sweep” spending spree during free agency in March 2021. In 19 games for the Patriots, he has 35 receptions for 352 yards and a touchdown. To put it another way, he’s averaged 18.5 yards per game more for the Patriots over the past two seasons than the long-retired Ben Coates has. But — and I know this is something we’ve said often with disappointing results when it comes to Smith — maybe this is the week he breaks through. Matt Patricia would be foolish to let Hoyer, who in 26 games with the Patriots (eight starts) since the 2017 season has nine touchdown passes and nine interceptions, attempt to make plays downfield. When the Patriots do attempt to get Smith involved, it’s almost always near the line of scrimmage. Get this: on his seven receptions this season, the ball has traveled a total of 7 yards in the air before the catch. Smith has been decent after reception, averaging 7.3 yards after the catch. Fine, I’ll say it again: Maybe this is the week he … well, you know.

Rhamondre Stevenson: It got lost a little bit when last Sunday’s game with the Ravens got away from the Patriots in the second half, but Stevenson produced one of the best all-around performances of his young career. He ran for 73 yards and a touchdown on 12 carries, the fourth-best rushing total in his two seasons, and caught four passes on five targets — both tying career highs — for 28 yards. Stevenson’s career high in touches is 24, which he’s done twice. The Patriots would be wise to get him more than the 16 touches he had against the Ravens. The Packers run defense ranks 18th in the league at 113.3 rushing yards allowed per game and, in Week 2, allowed the Bears’ David Montgomery to scamper for 122 yards on just 15 carries.

GRIEVANCE OF THE WEEK

No player in NFL history has benefited more from media myth-making than former Packers quarterback Brett Favre. His long, detailed history of scumbaggery is a quick and easy Google search away, but the national narratives never changed because of his practiced aw-shucks manner and accessibility to all of the big names. That should have changed long ago, at the very least when we learned what he sent to a female Jets employee’s phone. And it had better change now. Two years ago, Mississippi alleged that its Department of Human Services misappropriated millions of dollars of federal money earmarked for needy families. Auditors determined that $1.1 million of that money went to Favre for two speaking engagements he never made. Then, this month, a lawsuit filed by the state alleges that Favre, in cahoots with a former governor, intended to divert $5 million meant as federal welfare funds toward building a new volleyball court at his alma mater, the University of Southern Mississippi, where his daughter played the sport. Then, on Wednesday, ESPN reported that tax records show that Favre’s charity, which receives public donations to purportedly aid disadvantaged and disabled children and breast cancer patients, donated more than $130,000 to the University of Southern Mississippi Athletic Foundation over a three-year span. Favre hasn’t been charged with any crimes yet, but the evidence of his avaricious behavior is overwhelming. Favre’s legacy isn’t tarnished. It was fraudulent in the first place.

PREDICTION, OR THE PACKERS HAVE NOT HAD A LIKABLE QUARTERBACK SINCE DON MAJKOWSKI …

Considering the Patriots and Packers have met just four times at Lambeau Field and 11 times total in the regular season, they sure have had some interesting matchups and moments. The Packers were the first visiting team to win at Gillette Stadium in 2002, beating the Patriots, 28-10, in Week 6. In 2006, the Patriots knocked Favre out of the game — he nearly ran over Patriots cornerback Ellis Hobbs III while leaving the field on the cart — and took apart a not-ready-for-prime-time Rodgers in a 35-0 win. During a 2010 matchup, Patriots offensive lineman Dan Connolly returned a kickoff 71 yards, and I tell you, I think I’d trust him as a return man more than I do Myles Bryant. In the Patriots’ last visit to Lambeau, in Week 13 of the ‘14 season, the Packers prevailed, 26-21. It was the Patriots’ last loss that season. They also met in a Super Bowl once, as you might recall, before Super Bowls became the norm around here.

Maybe something will be added to their brief but quirky mutual history Sunday, but I doubt it. Hoyer is a good sounding board for superior quarterbacks, but he never really was a particularly good quarterback himself, and winning a matchup against perhaps the most talented quarterback in NFL history is not a fair ask at this stage. The Patriots will keep it closer than conventional wisdom suggests, but moral victories don’t count in the standings. Packers 27, Patriots 20.

Get breaking news and analysis delivered to your inbox during football season.