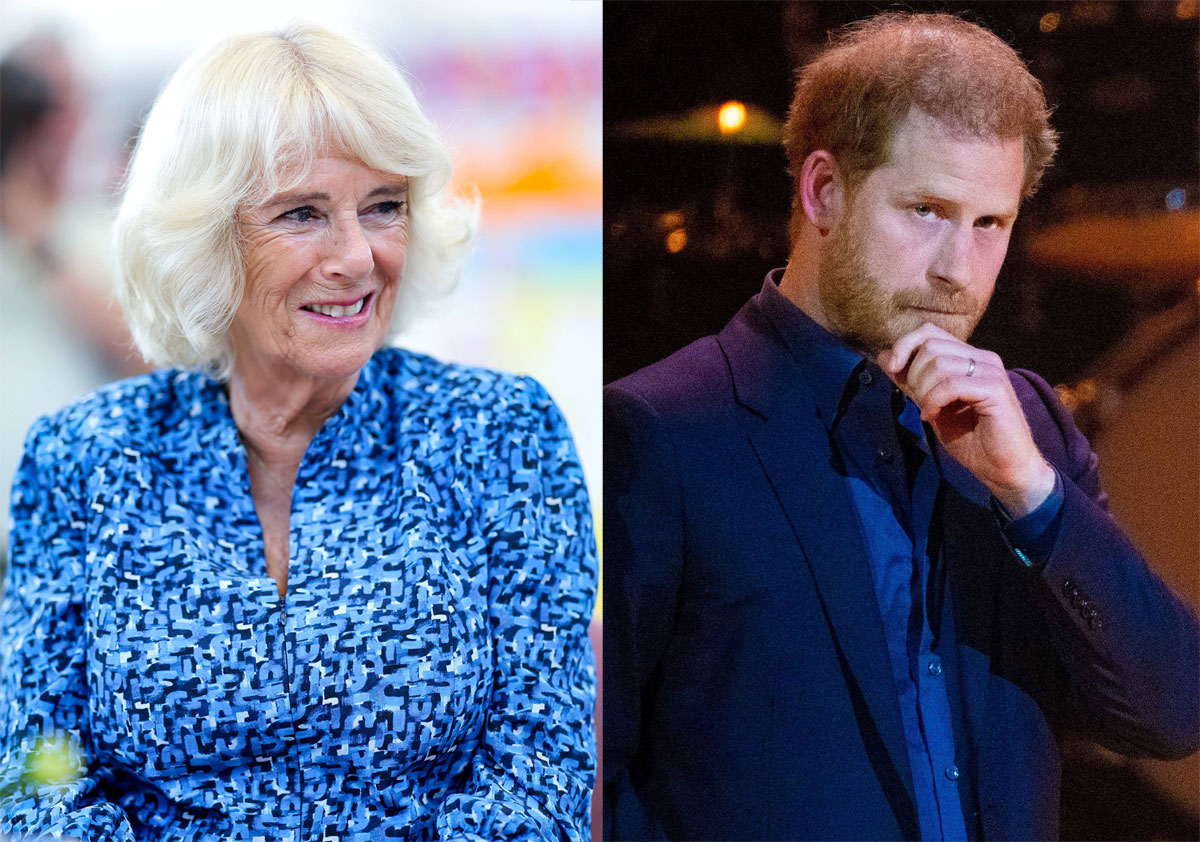 Uhh, didn’t she already have a not-so-great reputation??

On Friday’s episode of Lorraine with guest host Christine Lampard, royal biographer Angela Levin argued King Charles III’s wife has been “misrepresented” in the media over the years because of the popular TV series The Crown and Harry’s “nasty” comments about her!

Christine started off the conversation with Angela, who was there to promote her new book, Camilla: From Outcast to Queen Consort, by asking:

“Angela, you felt compelled to write this book because you knew her and felt she had been misrepresented throughout the years and you wanted to give your version of events almost?”

“Yes, that’s spot on actually. I decided I had to rebalance things. One was The Crown which I felt had been really cruel to her and the other was actually Prince Harry who had said really nasty things about her, too.”

In The Crown, Camilla was largely depicted as King Charles’ mistress with much of the focus on the impact the affair had on Princess Diana, who is still largely beloved by the public. Angela argued that the depictions of the Queen Consort have been unfair — and that “the more you get to know her the more you like her.” But she didn’t entirely blame the late Princess, instead arguing Camilla was always set up to have a hard introduction into the family. She explained:

“They met when Charles was 22 and she was 24. They got on extremely well, but he was not sure at that age that he wanted to commit himself. But, also, he knew there would be trouble with his parents because then – and it shows how much things have changed – the wife of the heir to the throne had to be a virgin and she also had to come from an aristocratic background. Her background was aristocratic, but not at the highest level and she had had other relationships. So, he knew they wouldn’t expect that, which looking back now, seems sort of ridiculous and no longer exists.”

Def ridiculous! Though we think cheating with a married man is also a very good reason for people to be skeptical about her!

To combat the negative narrative surrounding the 75-year-old, the prolific author spoke with many people who know and worked with Camilla over the years for her latest book. Angela also has first-hand knowledge since in 2015 she was allowed to spend three months with Camilla while writing another piece — and she even got to meet Queen Elizabeth II! It wasn’t just a friendly meeting, though, it was a very clever PR move! The journalist noted:

“That was really funny. I was at home. I got a call from Buckingham Palace saying was I doing anything in the afternoon because the Duchess would like to meet me at Buckingham Palace. So, obviously, [I] drop everything and rush over there. And they said, well she’s got a surprise for you but it might not happen so don’t be upset if it doesn’t.”

While they teased it was a “big surprise,” Angela wasn’t expecting much, but it turned out to be Her Majesty! She continued:

“She [Camilla] arrived and I had practiced my courtesy; I knew how to do that already. And the Queen arrived, and she introduced me to the Queen and she said, ‘Come on in, we’re going to look at something amazing.”

The writer was led to the Buckingham Palace stables where she met horse trainer Monty Roberts. During the interaction, Camilla and the Queen were both “talking non-stop and laughing because they both adore horses,” she added:

“I thought afterward this was a very clever and kind thing to do so that I could see for myself how she got on with the Queen. Because there’s been so many things [saying] that the Queen didn’t like her and all that. But this way, she didn’t have to say anything, she didn’t have to say something that wasn’t appropriate. I could watch and see how natural they were.”

The royal insider went on to insist she’s the “ideal” woman for the King considering she doesn’t “like to be in the spotlight,” she continued:

“She’s not somebody who likes to be in the spotlight, right in the middle, which is ideal for Charles so he doesn’t get jealous like he did with his first wife.”

LOLz!! Perhaps he needs to let go of his ego! She went on:

“[She] does a tremendous amount of work behind the curtain. She doesn’t need praise for herself. She feels very strongly. What she has done is things that the royal family don’t necessary do — to deal with rape, to deal with domestic violence, all those things. And literacy which she feels is very important.”

We can’t fault her there. Those causes need plenty of support!

Of course, this glowing review of the Queen Consort comes while the royal family awaits the release of Prince Harry’s upcoming memoir and Netflix docuseries. According to several reports, the Duke of Sussex is said to be seeking “revenge” on his stepmother in the pages of his explosive book. Angela told Talk Radio in March:

“Anyone who is anyone is saying it’s going to attack Camilla and make her responsible for [his] mental health and how she stole his father from his mother.”

But is it really Harry’s fault for her being misrepresented?? Or was that bound to happen given her and Charles’ past? We mean, the woman wore white to Princess Diana’s wedding for crying out loud! But take a listen to the biographer’s full interview on the matter and then let us know what you think (below).

Sooo, thoughts? SOUND OFF in the comments!