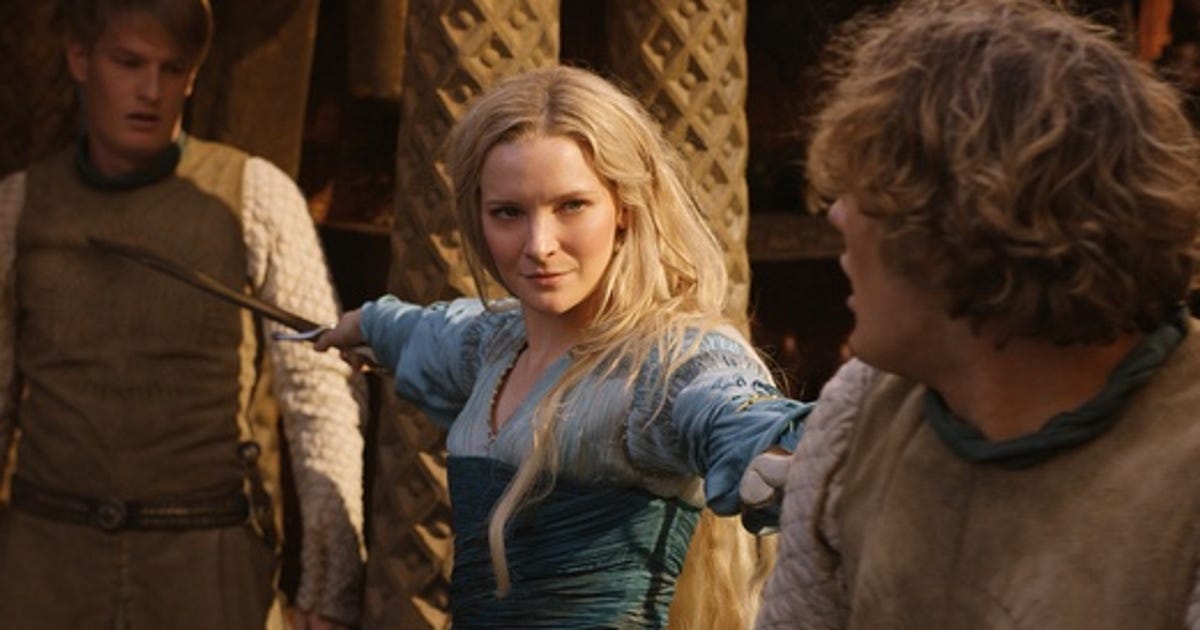 Episode 5 of The Lord of the Rings: The Rings of Power finds Elrond facing a difficult choice, while Númenor readies itself to go to war. Oh, and Durin is an absolute legend. You’ll see why.

If you need a refresher, we’ve already recapped episode 1, episode 2, episode 3, and episode 4. Here’s our look at the action from the latest installment — be warned: spoilers ahead.

ON THE ROAD — This week we catch back up with the Harfoots. Nori and her family are majorly pulling up the rear. We even get a little map montage as they drag their carts across the expanse of Middle-earth. Nori and the Stranger have a conversation whose vibe somehow straddles the line between Hooked on Phonics and a freshman philosophy about the nature of good.

At one point, Nori’s family and the rest of those jerk Harfoots who wanted to leave them behind (one even has the audacity to suggest stealing their wheels and leaving them to die) get chased by wolves. The Stranger comes to the rescue and pounds on the ground with his fist so hard it creates a shockwave and scares off the wolves. Unfortunately, he injures his arm. But hey, those cranky, old, discriminatory Harfoots like him now.

From here, we get another glimpse of the Stranger‘s ability to manipulate the elements. He soaks his arms in some water and starts turning it to ice, but he’s so wrapped up in his incantation he doesn’t notice that Nori touched his arm, and she’s starting to freeze up like a wee Harfoot popsicle.

ICE TO MEET YOU.

Sorry. Anyway, she’s OK in the end, but it freaks her out. Nori is that person who posts on Facebook about having rescued a lost dog, but the attached photo is a rabid coyote. Oops.

Elsewhere, a trio of creepy people all in white (including the person with the bleached brows from the trailer everyone thought was definitely Sauron) investigate the crater where the Stranger landed. Damn tourists.

LINDON — It’s family dinner time. Durin, Elrond, the High King Gil-galad and presumably other people I wasn’t paying attention to share a meal and a toast to the union (TO THE REVOLUTION! Any Hamilton fans out there? Heh? Heh?) of their people. But like many family dinners, it’s a bit tense. Gil-galad is asking probing questions about the heck the dwarves are working so hard on in Khazad-Dûm, and Durin informs him that the stone table they’re eating on is a rare stone that the Dwarves use only in monuments and tombs. Imagine serving someone a charcuterie board on their grandfather’s headstone. It’s a statement piece.

Here’s the deal. Gil-galad basically knows the dwarves found mithril, and he’s bullying Elrond into confirming it. Elrond is like look, I pinky promised my BFF. Gil-galad makes Elrond recount the creation story of mithril involving an elven warrior and a Balrog (a fire demon) battling over a tree that supposedly contained one of the lost Silmarils. The reason any of this matters is because Lindon is starting to decay, and the light of the elves is fading. But if the elves could get their hands on a lot of that sweet, sweet mithril, which contains the light of the Silmaril, they could saturate all the elves in that light.

Allow me to offer this commentary: Wut?

Otherwise, the elves will have to leave Middle-earth, and Sauron will be dancing around in his shirt and socks like Tom Cruise in Risky Business. And if you’re wondering, no, none of this is from Tolkien.

The next day as Durin is leaving Lindon with the stone table (and the revelation that he actually just conned Gil-galad out of his furniture), Elrond explains to Durin the problem. And you know what? For all that elven drama that night before, Durin tells Elrond to, “fetch your feathery shirts and let’s start walking” so they can go talk to Durin’s dad.

SOUTHLANDS — If you thought Adar was weird last week, he’s even weirder in this episode. An orc comes up to him while he’s soaking in some sun, and Adar goes on a little riff about how soon, he won’t be able to enjoy the sun like he currently does. (Me, after a dermatologist appointment.) Seems like he’s going to undergo some type of transformation? He is the guy at the party you’re trying not to talk to.

Anyway, SUMMON THE LEGIONS and whatnot.

Back at Ostirith, Bronwyn addresses the crowd and gives a stirring speech about how they should stand and fight against Adar, instead of swearing fealty. The crowd seems relatively convinced until Waldreg turns up to stir opposition. I swear, I had no idea his dude was going to be so much trouble. He convinces half the crowd to leave Ostirith. By that evening, Waldreg and his merry band of misfits meet up with Adar and the orcs, and as we say in the South, he runs his mouth, pledging his loyalty to Sauron. Because emo elf dude is Sauron, right? Embarrassing. The last we see, Adar is going to make him kill a youth to prove his loyalty. And maybe his butchering skills?

At Ostirith, Theo has finally developed a shred of sense and shows Arondir the sword hilt. Arondir has seen something like this before, and in a very Legends of the Hidden Temple move, sweeps back some vines and BOOM there’s a skull-looking thing carved into a rock, along with a stone version of the sword. Amazing how that was just there the whole time. Arondir tells Bronwyn the hilt is some kind of a key and that Adar knows Theo has it. The fires from the encroaching orcs coming toward the tower are stress-inducing.

NÚMENOR — The ships are about to sail for Middle-earth. They are loaded with horses, supplies and drama.

Isildur wants to go but his dad won’t let him because he got kicked out of the Sea Guard. Eärien and her paramour, Kevin, (I know his name is actually Kemen, please don’t email me) don’t want Númenor to get involved. Pharazôn supports the war, but only because it will give Númenor dominance over the humans of Middle-earth. And Halbrand just wants to be friggin left alone. Everyone is constantly bristling and talking through their teeth.

There’s a scene where Galadriel shows some recruits how to fight and shames all of them with her elf moves. So that’s fun.

Later, Galadriel and Halbrand finally have one of those air-clearing blowouts where he tells her he’s done some really bad stuff, and she talks about how her brother died and and her best friend betrayed her *cough Elrond* and how she has no rest. But hey, maybe they can have something approximating peace if they go and fight. Because that’s how that works.

The big hub-bub comes the night before they’re about to set sail. While everyone’s partying it up, Kevin sneaks onto a ship with arson in his heart. He runs into Isildur, though, who is trying to stow away. After a brief tussle, the Kevin’s lantern breaks and the ensuing explosion destroys not only that ship, but another. Somehow they both get away in time.

It’s chaos. Pharazôn wants to delay the mission. Míriel declares they will decide in the morning, but really it’s all going to come down to whether Halbrand is committed to the whole king thing. Fortunately, he decides he will, and they all sail off, including Isildur who’s gotten a post finally — sweeping up after the horses on the ship.

What waits for them in the Southlands? Emo elf Adar and whatever Waldreg is up to these days. What a welcome wagon.