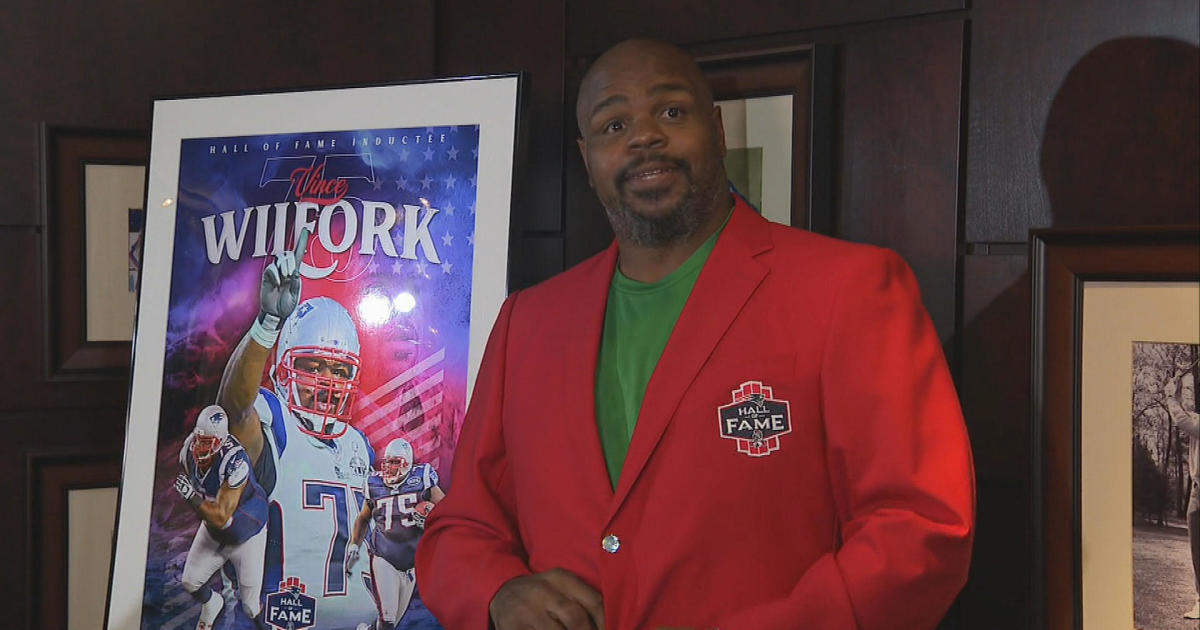 FOXBORO — The Patriots are holding a big party for Vince Wilfork this weekend. But first, he had to get fitted for some new threads.

Wilfork will be inducted into the Patriots Hall of Fame on Saturday, and was fitted for his red Hall of Fame jacket on Thursday. A massive nose tackle during his career, Wilfork has slimmed down quite a bit since his playing days ended in 2016.

He’s looking pretty svelte these days, and boy does he look good in red.

“I never once, when I played, ever though about a jacket. From [the Pro Football Hall of Fame in] Canton or even the Patriots. I just loved playing football, and that’s all I thought about,” Wilfork said on Thursday. “Now that you retire and you get a chance to see everything you’ve done in your career… now I can sit back retired and kind of watch everything my fans, friends, and family saw and told me how good I had done. As a player, I was like, ‘Nah, I wasn’t good enough.’

“Now I can sit back and feel very honored about the career that I had, the organization that I played for and drafted me. That brought a kid’s dream since he was four to life,” he added.

Wilfork got a tour of the Hall of Fame after getting his jacket, checking out the 31 other members of the franchise that have been enshrined. Wilfork certainly earned his place among those fellow greats over his 11-year career in New England, which saw him establish himself as one of the best defensive linemen in the game. He won two Super Bowl rings with the Patriots, and was a five-time Pro Bowler during his time in New England.

He couldn’t pinpoint one moment that stood above the rest during his playing career. That is thanks in large part to his consistency throughout his career. If Vince Wilfork was on the field, he was going to dominate for the Pats.

But he made it clear on Thursday that his place in the Hall of Fame — and that new jacket of his — is not just for him. He credits the entire Patriots organization, his fans, and his family for everything that he accomplished.

“Taking the field with my teammates. Having time with my teammates in the locker room and meetings. Playing on Sundays was fun; that was just second nature,” said Wilfork. “The times that I cherished the most was when we were in the meeting rooms together, the training camps, the dog days, preparing for AFC Championship games and preparing for Super Bowls, looking around at my teammates and understanding what we were doing. We had a mission, and that’s how I looked at it.

“That’s what I miss. I miss my teammates and my coaches. The game — I’m OK with the game,” he said. “But everyone I touched, everyone that has been there for me, and I trusted them with everything I possibly could while playing the game, that is what I miss. That’s why today is just not for me. It’s for my teammates, the city, the fans, the staff, the coaches, my family.

“This jacket means everything to all of us. I know I’m wearing and it and I’ll keep it at my house, but this is for all of us,” said Wilfork.

Wilfork was one of the many leaders in the New England locker room during his time with the team. Bill Belichick is always mentioning Wilfork’s play and approach as an example for his players, another honor that is not lost on the big guy.

He enjoyed some pretty big matchups against the Baltimore Ravens during his career, so it’s only fitting that the former foe is in town to play the Patriots on Sunday. Wilfork hasn’t had a chance to talk to the team this week (he’s been a bit busy, after all), but would love to give another locker room speech come Sunday morning.

“It would make me happy,” he said. “We have a little rivalry [against the Ravens], and I have a few things I would love to tell the team to get them ready. We’re going to see if we can make it happen.”

Just don’t ask him to suit up one final time. Those days are over.

“I was one of those players to say no matter how I got, I could play football. That was my mindset. But I’m here to tell you I can’t play. I’m officially retired from football,” he said with a massive smirk. “Don’t ask me to get in my stance. Don’t ask me if I can do this. The answer is no! Don’t ask me if I have one play in me. No!

You can watch Vince Wilfork’s Hall of Fame ceremony on Saturday live at 4 p.m. on CBS News Boston and TV 38!