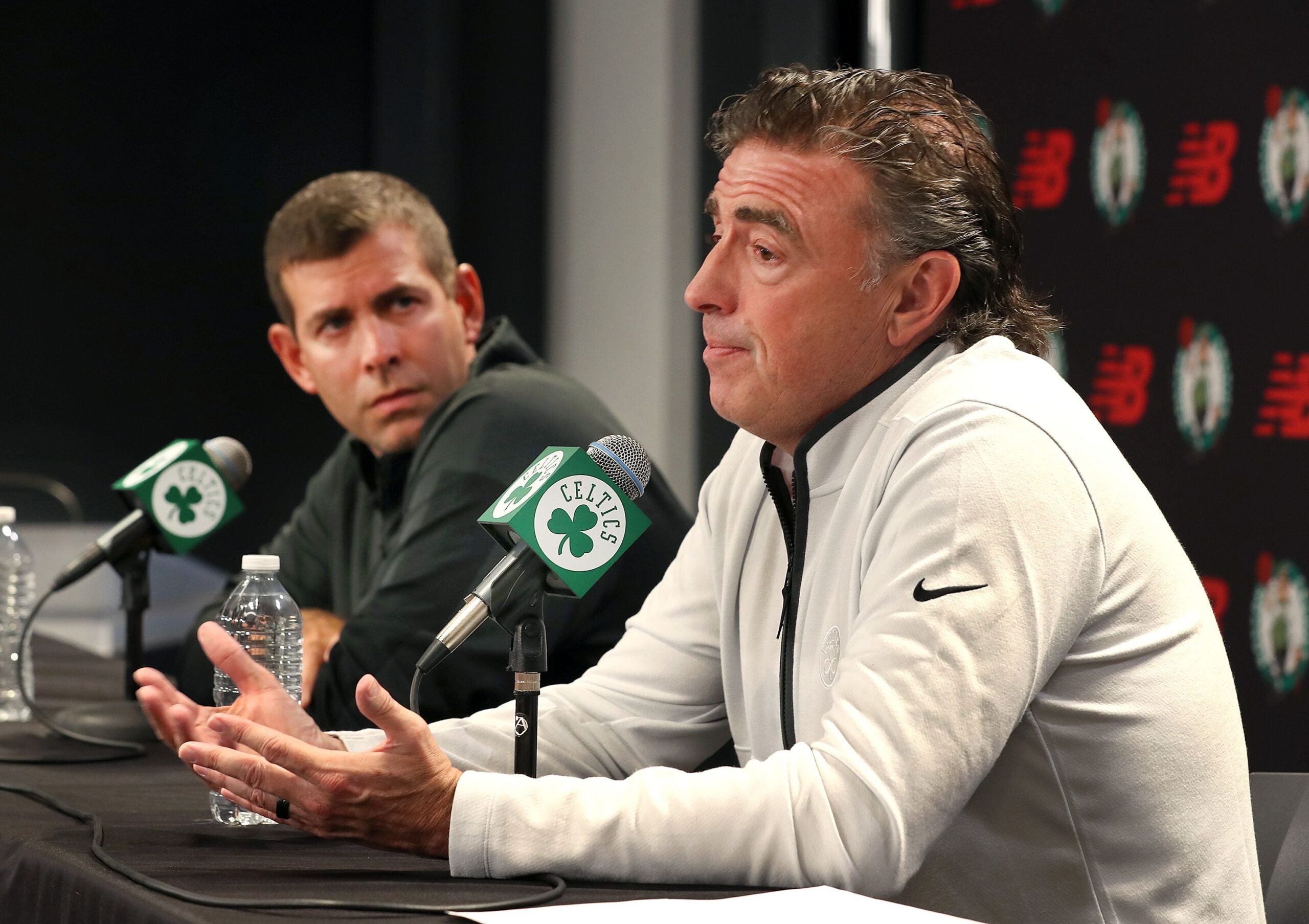 Celtics owner Wyc Grousbeck and president of basketball operations Brad Stevens addressed the media Friday for the first time since they suspended coach Ime Udoka for the entire 2022-23 season.

In the press conference, Grousbeck provided a glimpse of the timeline between the summer, when they first learned of Udoka’s relationship with a Celtics staffer, prompting the club to open an investigation. The investigation, which Grousbeck said was led by an independent party, lasted several weeks and concluded Wednesday. Grousbeck said it unearthed that Udoka committed multiple violations of the team’s conduct policy, leading to the yearlong suspension announced Thursday night.

Here’s what we learned from Friday’s press conference.

In his opening statement, Grousbeck said he couldn’t provide what exactly happened with Udoka for “privacy reasons,” referring back to the team’s statement from Thursday, which called “fairly crisp.”

“As soon as we learned there was a potential situation, we immediately brought in a respected law firm to conduct a thorough investigation and impartial investigation,” Grousbeck said. “They took some time. We actually completed that investigation with a report two days ago, so that’s the reason for the timing here.”

Grousbeck indicated that the investigation took place at least over multiple weeks before it wrapped up on Wednesday.

“The investigation had some twists and turns,” Grousbeck said. It took some time to develop all the facts. It finally concluded — for now, everything concluded two days ago.”

Grousbeck denied that the Celtics “leaked” any details of the investigation’s findings to the media over Wednesday and Thursday.

How the Celtics came to the decision to suspend Udoka for a season:

When it was first reported that Udoka had a consensual intimate relationship with a Celtics staffer, some people — such like former Celtics player Paul Pierce — were surprised at the length of the suspension.

Grousbeck explained why he felt Udoka had to at least be suspended.

“We have reflected as a group and with outside advisors — and a diverse group, in fact — of people in deciding what to do, which I take responsibility for at the Celtics, everything that’s decided,” Grousbeck said. “I personally feel this is well warranted and appropriate, backed by substantial research and evidence and facts. I’m standing by the decision, and Ime has accepted it. He expressed an appreciation, and I don’t want to belabor that, but he’s been accepting of it and he’s planning to move forward on this basis.”

As reports about Udoka’s behavior emerged, some questioned why the Celtics opted to suspend him instead of firing him. Grousbeck shared why he opted to go with a suspension, for now.

“This felt right, but there’s no clear guidelines for any of this,” Grousbeck said. This is really conscience and gut-feeling and being here 20 years. I’m responsible for the decision, ultimately, but I took a lot of advice from partners, like Brad and others, and we collectively came to this and got there. It was not clear what to do. But it was clear something substantial needed to be done in my view — and it was.”

Udoka’s future with the team is uncertain.

Grousbeck said that Udoka’s suspension will last though June 30, 2023, the final day of the 2022-23 NBA calendar year. There’s no guarantee Udoka will be back in Boston on that date.

“We’ll make a decision at a later time about Ime’s future with us and that will be discussed at another time and hasn’t been decided at this point,” Grousbeck said.

Celtics players were ‘concerned’ about the issue

No Celtics player has commented on Udoka’s suspension yet, but Grousbeck peeled the curtain open a bit on the conversation he and Stevens had with them about it.

“I would say, in general, they are very concerned about this,” Grousbeck said. “It is not a welcomed development. They also, I felt, have energy, focus, commitment, and drive to really accomplish great hopefully things this season. That’s the commitment I’m feeling about the players.”

Stevens said he understood if any players are upset about Udoka not being with the team this season.

“There was a real relationship there with a lot of guys,” Stevens said. “Rightfully so — they had an incredible year last year. They had a personal connection. There’s a care, both ways. Human beings are human beings, that’s going to be the way it is. To think guys on the team or coaches or anybody else in the organization can just walk back on the court and everything is fine is not the way it is.

“This is a really, really tough situation, but we’re going to be forward-focused.”

Stevens got emotional when standing up for women on the Celtics staff.

In his opening statement, Stevens shared a concern about how social media speculated about the situation.

“We have a lot of talented women in our organization, and I thought yesterday was really hard on them,” Stevens said, welling up a bit. “I think that nobody can control Twitter speculation, rampant [expletive], but I do think that we as an organization have a responsibility to be there and support them now, because a lot of people were dragged unfairly into that.”

“It’s unfortunate that female staff members of the Celtics have been dragged into the public eye unwillingly and inappropriately. We take a strong stand against that, and we regret it for them.”

Joe Mazzulla was confirmed to be the interim replacement.

Stevens confirmed the reports that Mazzulla will replace Udoka for the 2022-23 season.

“It’s not an easy timing for him, or the rest of the staff, but he’s an exceptionally sharp and talented person,” Stevens said. “I believe strongly in him and his ability to lead people and his ability to galvanize a room and get them behind him. Also his ability to organize and understand what comes with running a team during the season.”

Stevens dismissed any ideas of him being the coach.

Stevens had eight successful seasons as the Celtics’ coach before transitioning to his front office role a year ago. But he didn’t think about returning to the bench.

“Joe’s the best choice to do that — by a long shot,” Stevens said.

What if the Celtics, who have championship aspirations, don’t play as well as he’d like?

“There’s a lot of factors in play, I wouldn’t necessarily even want to do that,” Stevens added.

Grousbeck though seemed open to the idea of Stevens returning to the bench on an interim basis.

“We had a conversation, a brief one,” Grousbeck said.

Stevens said he vetted Mazzulla’s past transgressions ‘very thoroughly’ before hiring him as an assistant in 2019.

Shortly after it was reported that Mazzulla would be the Celtics’ interim coach, news of Mazzulla’s arrests and charges during his time at West Virginia (where he played on the basketball team from 2006-11) resurfaced.

Stevens said he’s known Mazzulla since the latter joined the Maine Red Claws’ coaching staff in 2016. He hired Mazzulla as an assistant for his squad in 2019, saying he vetted Mazzulla before hiring him.

“When we were considering hiring him as an assistant, I vetted that and the incidents when he was in college really thoroughly,” Stevens said. “I’ll tell you this: I believe in Joe’s substance as a person. I believe strongly. He’s been very open with me about how those moments have impacted him in every which way. You can see it in the way he carries himself.”

Stevens believes that Mazzulla has grown a lot since those days.

Stevens seemed open to the idea of adding another coach to the staff.

With one coach departing, it’d make sense for the Celtics to add another coach to the staff. Stevens was open to the idea when asked on Friday.

“We haven’t gone into a ton of discussions about adding to the staff,” Stevens said. “I think the staff checks a lot of boxes as is. There may be an addition.”

Sports Illustrated‘s Chris Mannix named Frank Vogel as someone who could potentially be added to the staff.

Get breaking news and analysis delivered to your inbox during basketball season.